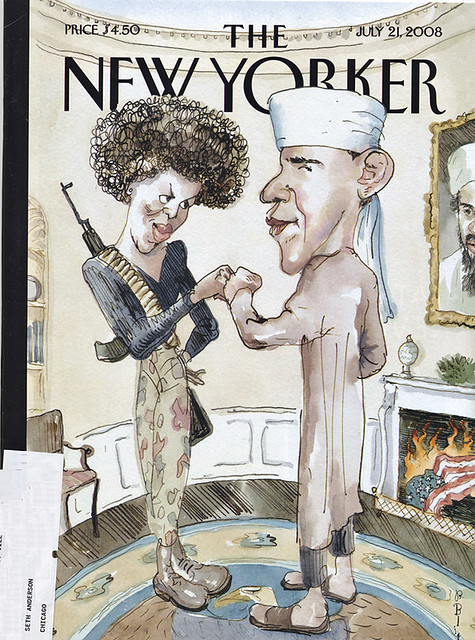 I don’t think Trump can even figure out how to get to the White House without whining about something or other. Meanwhile, one of the nation’s best political orators is leaving office after eight years, and the majority of the nation is mourning already.

George Packer writes about President Obama’s last major speech in office (YouTube if you didn’t already watch it, in its echoey greatness):

Obama’s farewell address from Chicago last week was one of the very best speeches of his Presidency. He had one overriding message: that American democracy is threatened—by economic inequality, by racial division, and, above all, by the erosion of democratic habits and institutions. Its urgency gave the speech an unusual rhetorical punch: “If you’re tired of arguing with strangers on the Internet, try talking with one of them in real life”; “If every economic issue is framed as a struggle between a hardworking white middle class and an undeserving minority, then workers of all shades are going to be left fighting for scraps while the wealthy withdraw further into their private enclaves”; “We sit back and blame the leaders we elect without examining our own role in electing them.” Lines like these might not prove deathless, but because of their bluntness, and because the times are desperate, they hit hard.

Politicians are always letting the public off the hook—it might be the most unforgivably dishonest thing they do. Obama was more candid than most, reminding Americans that the quality of our democracy depends on us—on our capacity to reason and to empathize, our attachment to facts, our willingness to get our hands dirty even when the political game seems sordid or futile. The key word of the speech was “citizen,” which Obama called “the most important office in a democracy,” one that he’ll embrace in his post-Presidency. His exhortations and implications of blame were nonpartisan: conservatives might have heard their denial of science called out, while liberals might have been stung by the allusion to fair-weather activism. Whites and non-whites alike were urged to imagine inhabiting a different person’s skin.

Most Presidential farewell addresses are quickly forgotten. Hardly anyone knows that Bill Clinton and George W. Bush both gave one, as did Jimmy Carter and Ronald Reagan. Those which endure are memorable for their warnings. When the new republic was still taking shape, in 1796, George Washington cautioned against domestic factionalism and foreign entanglements. At the height of the Cold War, in 1961, Dwight Eisenhower described a new “military-industrial complex” and a “scientific-technological élite” that were taking over public policy. Obama’s warning in Chicago—owing to its context, ten days before the Inauguration of President Donald Trump—felt even more dire. He quoted from Washington’s address, but not its most obviously relevant passage, on the danger of partisan demagoguery: “It agitates the community with ill-founded jealousies and false alarms, kindles the animosity of one part against another, foments occasionally riot and insurrection. It opens the door to foreign influence and corruption, which finds a facilitated access to the government itself through the channels of party passions.”

The rule is perfect: in all matters of opinion our adversaries are insane.