London somewhere. Presumedly a memorial to Britain’s reign as the pre-eminent naval power.

I think this was in Trafalgar Square, London, or nearby.

Drink your wine while ye may… Since I looked up this phrase to jog my memory of the entire epigraph, here is the Wikipedia explanation.

Carpe diem is a phrase from a Latin poem by Horace.. It is popularly translated as “seize the day”. Carpe means “pick, pluck, pluck off, gather”, but Horace used the word to mean “enjoy, make use of”.

In Horace, the phrase is part of the longer Carpe diem, quam minimum credula postero – “Seize the day, trusting as little as possible in the future”, and the ode says that the future is unknowable, and that instead one should scale back one’s hopes to a brief future, and drink one’s wine. This phrase is usually understood against Horace’s Epicurean background. Related expressions Rabbinic phrase “And if not now, when?” (Pirkei Avoth 1:14)

Life is too short, too fragile, ends too suddenly to worry about petty annoyances, and self-imposed barriers to entry in the slipstream should be discarded with haste. There’s more to this tale, but there is no need to spell it out, is there? Soho, London. From my hotel window, early one morning. Didn’t find an A Bomb in Wardour Street, probably a good thing 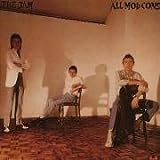 Warning, I took nearly 10 GB of photos, so this will probably be a photo blog for the next few days. Avert thine eyes if you whilst…

[and yes, am seriously jetlagged. Have no idea what time it is, what day it is, or where I am. ] Shot with my Hipstamatic for iPhone
Lens: John S
Flash: Off
Film: Pistil Shot with my Hipstamatic for iPhone
Lens: John S
Flash: Off
Film: Pistil

probably because I haven’t left the North American continent for so long, I’m excited/anxious about this trip.

We are actually woefully underprepared for the ostensible reason for the trip: meeting with a gentleman to discuss a new business venture we’ve been working on for a couple years. Part of the meeting will just be us talking with confidence about what we know, however we planned to bring more collateral material, but since we leave for the airport in a couple hours, increasingly looks like that task will not be completed.

Besides the business meeting, we scheduled in 3 full days to explore London, and while I wish we could stay longer, perhaps we’ll return soon. One benefit of filtering every single business expense possible through our corporate American Express cards is that we accumulate a lot of reward points, and this trip is a direct consequence of that. Our Virgin American seats even fold out to a bed – fancy.

We have someone staying in our house, so that’s one less worry, we trust her to monitor if any of our crazy, deluded neighbors try to cause trouble. That first morning I walked down Regent Street to St James’s Park, strolled around the ponds, came up by Prince Charles’s residence, climbed St James’s Street and returned the full length of Jermyn. I ordered tea. It consisted of tomato, cucumber and butter sandwiches, which the English are unreasonably fond of; ham and butter sandwiches, which I am unreasonably fond of with Colman’s English mustard; and cookies – or, excuse me, biscuits.

I had just settled in my easy chair when a key turned in the lock and a nattily dressed man in his 60s let himself in. He held a bottle of Teacher’s scotch under his arm. He walked to the sideboard, took a glass, poured a shot, and while filling it with soda from the siphon, asked me, “Fancy a spot?”

This man sat on my sofa, lit a cigarette, and said: “I’m Henry.”

This was Henry Togna Sr. He appears in a Dickens novel I haven’t yet read. I’m sure of it. He appeared in my room almost every afternoon when I stayed at the Eyrie Mansion. It was not difficult to learn his story. Though actually, when I spent a fortnight in London, the hotel had already switched hands to Henry Jr., and had lost a bit of its eccentricity. Not all mind you, but I might not have been able to afford staying there. Too bad.

(oh, almost forgot, this article originally appeared at Ebert’s blog, slightly longer, with more pictures. Really, the longer article is better, filled with more interesting details. You should read that instead…)

Other than the momentary shock at hearing Idris Elba1 speak with a non-Baltimore accent2, a typical Guy Ritchie film. Enjoyable fluff, a few cringes at clumsy dialogue, several over-the-top stylistic editorial elisions, and some excellent soundtrack choices3. If you’ve seen any other of Guy Ritchie’s films, you know what to expect: no new ground is broken here. I’ve seen worse, and better. Still, watched the entire movie, despite its lack of depth. Not every film is worthy of Criterion Collection status.

“RocknRolla” (which is how they say “rock and roller” in the East End) isn’t as jammed with visual pyrotechnics as Ritchie’s “Lock, Stock and Smoking Barrel” (1998), but that’s OK, because with anything more happening, the movie could induce motion sickness. It never slows down enough to be really good, and never speeds up enough to be the Bourne Mortgage Crisis, but there’s one thing for sure: British actors love playing gangsters as much as American actors love playing cowboys, and it’s always nice to see people having fun. Whew. Glad that’s on record – there’s bound to be a McCain supporter or two who will change their vote now that His Bobness has spoken.

Bob Dylan – who could justifiably claim to be the architect of Barack Obama’s ‘change’ catchphrase – has backed the Illinois senator to do for modern America what the generation before did in the 1960s.

In an exclusive interview with The Times, published today, Dylan gives a ringing endorsement to Mr Obama, the first ever black presidential candidate, claiming he is “redefining the nature of politics from the ground up”.

Dylan, 67, made the comments when being interviewed in Denmark, where he stopped over in a hotel during a tour of Scandinavia.

Asked about his views on American politics, he said: “Well, you know right now America is in a state of upheaval. Poverty is demoralising. You can’t expect people to have the virtue of purity when they are poor.

“But we’ve got this guy out there now who is redefining the nature of politics from the ground up…Barack Obama.

“He’s redefining what a politician is, so we’ll have to see how things play out. Am I hopeful? Yes, I’m hopeful that things might change. Some things are going to have to.”

He added: “You should always take the best from the past, leave the worst back there and go forward into the future.”

In all seriousness, if McCain wins, I might move to Denmark. Luckily, I don’t think he stands a chance, unless something weird happens.

The Bob Dylan exhibit sounds interesting. I wish I could take a week or so off and go to England.

The haphazard process leading to the London show began nearly 20 years ago when he was approached by an editor at the American publishing company Random House. “They’d seen some of my sketches somewhere and asked if I’d like to do a whole book. Why not, you know? There was no predetermined brief. ‘Just deal with the material to hand, whatever that is. And do it however you want. You can be fussy, you can be slam-bang, it doesn’t matter.’ Then they gave me a drawing book, I took it away with me and turned it back in again, full three years later.”

Published in 1994 under the abbreviated title Drawn Blank, the resultant images had been executed both on the hoof while he was touring and in a more structured way in studios, using models (“Just anyone who’d be open to doing it”) and lights. What was going on in his life during that three-year period to inform or provide a back story to the work? “Just the usual,” Dylan shrugs, fixed in the hunkered-forward, hands-clasped position he will maintain for most of our time together. “I try to live as simply as is possible and was just drawing whatever I felt like drawing, whenever I felt like doing it. The idea was always to do it without affectation or self-reference, to provide some kind of panoramic view of the world as I was seeing it.”

Built up of work that is often contemplative, sometimes exuberant but consistently technically accomplished and engaging, that view is of train halts, diners and dockyards, barflies, dandies and uniformed drivers glimpsed in New Orleans or New York, Stockholm or South Dakota. And of women. We’re left in no doubt that Dylan likes women. “They weren’t actually there at the same time,” he notes quickly, pointing, when his page-turning reveals the painting Two Sisters, its subjects lounging, one clothed, the other naked but for her bra. “They posed separately and I put them together afterwards.”

The method used to turn them into the paintings about to go on exhibition in London involved making digital scans of the original drawings and enlarging and then transferring them on to heavy paper ready for reworking. Dylan then experimented with treating individual images with a variety of colours. “And doing so subverted the light. Every picture spoke a different language to me as the various colours were applied.”

Every Harlot was a Virgin once.