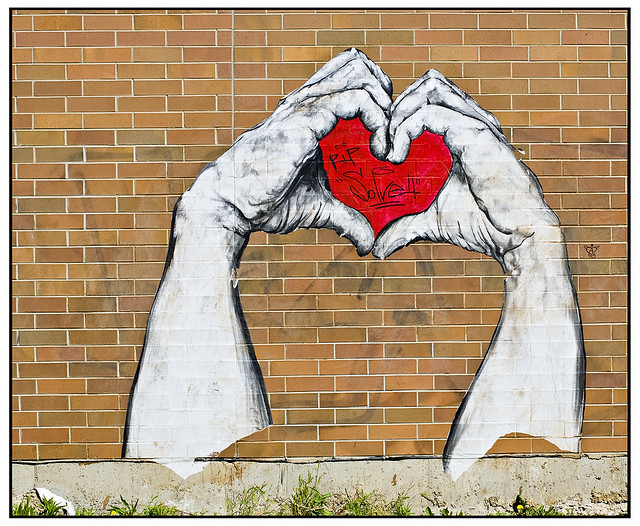 After Embarrassing Mistakes, Plan To Save Murals Emerges

Streets and San crews blotted out work by famous artists across the city. Now, an alderman and a city agency are on a mission to celebrate — not erase — such work.

“Big companies can put ads all over the city and it’s hard to go about your everyday life without being bombarded with advertisements and messages from every angle,” [Max Temkin, co-creator of the popular Cards Against Humanity game] said. “To me, street art represents the other side of that, people claiming civic space for themselves, for the public good, to share something that’s really joyful and surprising and meaningful.”

Now that’s something to celebrate. I am obviously fond of “street art”, and would love to see more of it around the city, as long as it retains its subversive spirit. 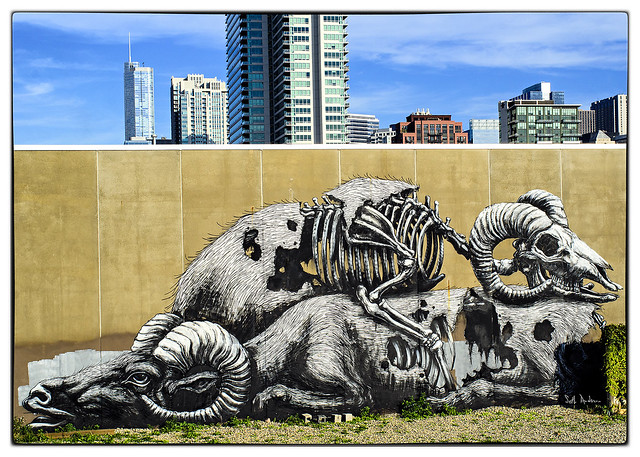 “Not all murals are graffiti and not all graffiti is public art,” [city cultural official Mark Kelly], who was a longtime administrator at art-focused Columbia College Chicago, said. “Oftentimes, graffiti is a public nuisance and in those cases it should be removed.”

Emphasizing that “public art should be respected and protected,” Kelly said that his agency, guided by the ordinance, will work with the Department of Streets and Sanitation to protect murals.

“This ordinance will mandate a more careful and coordinated process for identifying what is and what is not public art,” he said. “The process will encourage and protect murals and establish a process for treating damaged and endangered murals properly.” I have a certain fondness for graffiti, because if it is done well, if it is more than just someone’s scribbled moniker, it becomes Art. In fact, there is quite a lot of graffiti in Chicago that is just simply Art. I call it Street Art to distinguish graffiti I like from what is just juvenilia.1 The lack of permanence is part of the energy of the work, but apparently, Richard Daley contributed to Chicago’s cultural life in this instance without realizing it. I’ve visited a lot of cities, and Chicago has some of the best guerilla artists anywhere. For nearly 20 years, Chicago and Cook County have waged war on graffiti.

The city estimates it will spend $5.5 million to remove graffiti this year, and despite a $487 million budget deficit, the Cook County board renewed its commitment to the cleanup by rejecting Sheriff Thomas J. Dart’s proposal to scrap a suburban graffiti-removal unit costing $600,000 a year.

But the anti-graffiti strategy — deploying crews called graffiti blasters to quickly erase or blot out painted surfaces — has imposed a kind of natural-selection process in the graffiti subculture. By discouraging all but the shrewdest and most determined practitioners, the city and county have inadvertently contributed to making Chicago a vibrant hub of graffiti activity, according to experts.

“It made Chicago graffiti an aggressive and competitive sport,” said Sebastian Napoli, 32, who began writing graffiti around the city in the 1990s when writers called Chicago “the chocolate city” after the brown paint used to cover their work. The enforcement efforts “weeded out guys that get up once or twice and tried to call themselves writers,” Mr. Napoli said.

Roger Gastman, co-author of “The History of American Graffiti” (HarperCollins), said Chicago was “the biggest scene in the U.S. that is the most undocumented.” The book, to be published next month, explores graffiti in several cities and devotes two chapters to Chicago. It will be the first look into the city’s elusive subculture since William Upski Wimsatt’s self-published “Bomb the Suburbs” in 1994.

According to Mr. Gastman and his co-author, Caleb Neelon, the rise of Chicago’s new breed of graffiti writers dates to Mayor Richard M. Daley’s campaign to eradicate graffiti as part of preparations for the 1994 World Cup games at Soldier Field and the 1996 Democratic National Convention. I have a bunch of photos of Chicago street art, if you want to see some examples I’ve encountered. Click here, or here for instance. Or use the Lightbox slideshow (click the triangle to start the show) It was the first of a three part werewolf series which went up in Chicago and New York.I’m glad to see it’s aging well.

The artist’s website has photos of some other work (that I’ve also photographed), check it out. plus my sister took this photo in New York recently. doorway of the abandoned USPS Chicago HQ…which is still for sale if you’ve got a few million dollars in your piggybank. under the Bloomingdale Trail underpass RIP Solve aka Brendan Scanlon. Died entirely too young. My condolences to his family, friends, and many fans. I’ve taken several photos of his work, but didn’t know him personally.

Prominent renegade Chicago street artist, Solve, was one of four homicides registered in Chicago this weekend, raising even more the already large number of violent crimes and shootings in the city this year.

Only twenty-five years old, Solve, A.K.A. Brendan Scanlon, was found with multiple stab wounds to the chest at 3032 W. Palmer Blvd. at 2:40 a.m.

A suspect is in custody for the stabbing incident, but no charges have yet been filed.

The murder Of Brendan Scanlon delivers a overwhelmingly saddening blow to the art and graffiti community of Chicago. Solve was a major influence and participant in the emerging and struggling Chicago street art scene in a city with one of the strongest anti-graffiti laws and tactics in the United States.

see also discussion here, and brief article at the Sun-Times.

Brendan Scanlon, of the 2800 block of West Palmer Blvd., according to the medical examiner’s office, was found with multiple stab wounds to the chest at 3032 W. Palmer Blvd. about 2:40 a.m., Kubiak said.

As of 6:30 a.m. an adult offender was in custody, but no charges have yet been filed. — update: obituary in the Sun-Times

At least one person is in custody for the fatal stabbing of a well-known local graffiti artist in the Logan Square neighborhood early Saturday.

The man was found with multiple stab wounds to the chest at 3032 W. Palmer Blvd. about 2:40 a.m., according to police News Affair Officer Laura Kubiak.

The man, identified as Brendan Scanlon, was leaving a party when he got into a “verbal altercation” and was subsequently stabbed, police said.

Police were “talking to people” Saturday evening and as of 6:30 a.m. an “adult offender” was in custody. No charges have been filed.

Scanlon, of 2846 W. Palmer Blvd., died of a stab wound to the chest, an autopsy determined Saturday. His death was ruled a homicide by the County Medical Examiner’s office.

Scanlon graduated from the Illinois Institute of Art in 2007, and worked as a freelance artist and graphic designer, according to his Web site.

Scanlon is reportedly the man behind SOLVE, a local graffiti and street artist. Many people discussed his death on a Chicago Street Art online discussion forum Saturday.

“The Chicago street art and graffiti community has suffered another devastating blow to our family,” one of the forum members posted Saturday. A memorial featuring Scanlon’s work is reportedly being planned.

Scanlon wanted “to be a respected member of the international design community,” and thought “art is one of the things that makes life worth it,” according to his Myspace profile, where friends posted mournful comments Saturday.

GapersBlock profiled Solve, and some other Chicago street artists a while ago.


SOLVE
His handle is a verb, not a noun. SOLVE uses his street art to “foster a more positive, productive society.” His work tends to be among the most confrontational in the Chicago street art scene — and that’s precisely his aim. Although he primarily works in larger format paste-ups, SOLVE brings his inventive and colorful style to other aspects of the North Side, especially signal boxes.

SOLVE wants you to know that he is not in a gang. And neither are most street artists.