Director Mark Landsman totes his cameras to a tight-knit North Houston community in this poignant documentary, which celebrates an inner-city high school bandleader’s lasting influence on his now-grown students.

And a repost from my old blog, thanks to a question from Beth

The calendar year isn’t over yet, but as of today, my favorite album of the year is a compilation of high school marching band music from Kashmere High School in Houston, TX, recorded by their band director, Conrad O Johnson in the years 1968 – 1974. I wish my high school band funked as hard. I’m looking at you, Beth.

In fact, I wish I knew of some contemporary bands that funked as hard. Wow. Hard not to dance in one’s chair when the songs pulse out of one’s speakers. We mentioned the release of this compilation a few months ago, and I bought the CD within the week, of course. 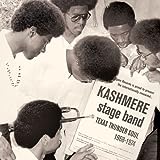 NPR/KUT-Austin recently broadcast a small article, with some song samples:

At first, judges didn’t know what to make of the kids from Kashmere in their platform shoes and matching crushed-velvet suits. Their impeccably choreographed moves were more James Brown than high school big band, and the music was often an original funk composition by Johnson himself.

But KSB was soon winning national championships, and a larger-than-life reputation as undefeatable. For 10 years, even with constant changes in the lineup as kids graduated, KSB was considered by some to be not only the nation’s best stage band, but one of the best funk bands — period.

Between 1968 and 1978, KSB recorded eight studio albums. As Johnson neared retirement in 1978, the band broke up, and before long, the band was largely forgotten. But not by everyone. Kashmere’s recordings became prized by hip-hop producers and DJs, who sampled them and played them in clubs.