An item from my past… 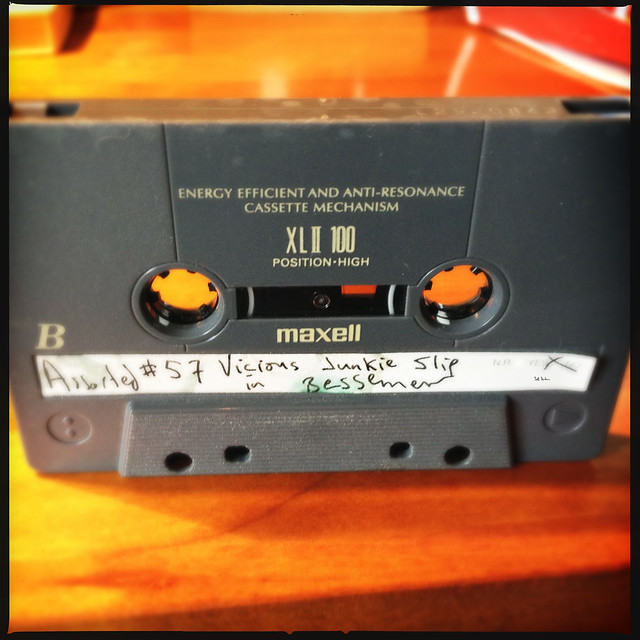 Starting somewhere around the age of 16, I started making numbered mix tapes. I’d make a few a year, first for playing in my car, then later for playing during my Magnolia Cafe South shifts. This was before I switched to CDs, so these were composed by placing the needle on a track I liked. I wish I had all these cassettes still, with the songs on them listed as well. I bet I would recognize the playlist order if I heard one of them now, I played them so many times.

I don’t have a working cassette player at the moment, which means I only know 3 songs that are for sure on this particular mixtape: I always made the title out of various songs on the mix.

Usually the last song on either side was an instrumental, so that it could flip to play the other side without being cut off mid-sentence. At home I listened to a lot of heavier stuff – punk rock, heavy bebop and so on, I didn’t put these on the mixes as often someone would complain1 and then I’d lose my control of the music flow. Maybe once in a while, I’d slip in a bit of something like the Butthole Surfers, or Public Enemy, but it was a risk.

I don’t recall if this particular one had any sound collages of snippets of several songs, but I recall creating some of those before I knew much about mixing. All done by hand with a turntable and a cassette deck, and inebriant of choice. I did sometimes check out vinyl records from the public library, and added a song or two even if I didn’t love it just to have something new.

Some mix tapes were thematic, some were just collections of songs I liked. I think I got up to #71 or #72 before I started making CD versions, and then just playlists on an iPod/iPhone.

I remember Glass Eye — Brian Beattie is my step-brother.

I always thought Glass Eye should have made it bigger than they did, I saw them live several times, they were always good

Football is a mistake. It combines the two worst elements of American life. Violence and committee meetings.