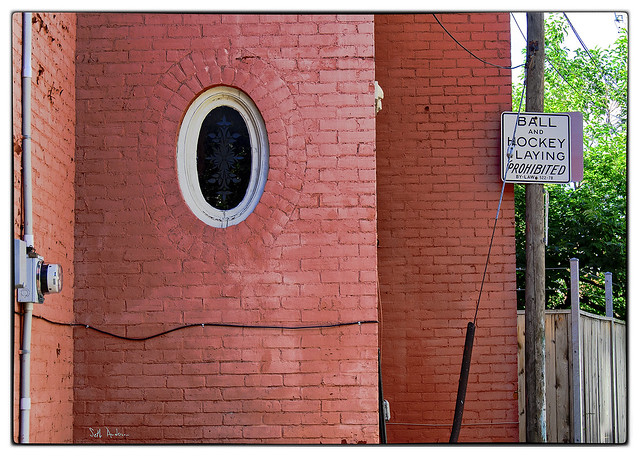 In re: the 20 photo slide show linked to below, I’ve often wondered about the signs restricting handball playing. In all my life, I’ve never witnessed anyone ever playing handball against a wall, but there are so many posted notices. I guess it was part of the anti-Irish sentiment of that time, and the signs simply remain. Or else, munchkins only come out early in the morning when I’m still asleep…

A century ago, handball was one of the most beloved sports in Ireland, its typical three-walled alley, or court, a fixture in villages and at crossroads. But these were “more than just places where people came to play handball,” says the photographer Kenneth O Halloran, who visited nearly a hundred abandoned courts in Ireland and Northern Ireland last year. “People came to socialize, to dance.”

After the game moved indoors around the 1950s, many courts that were not demolished became places for parking or storage. There is little nostalgia among the Irish for handball alleys, O Halloran says. “I don’t think people would value them the way they value a traditional cottage, old crosses or ancient ruins,” he says. “A lot of people see them as eyesores.” J

(click here to continue reading Three Walls in Search of a Ball – NYTimes.com.)