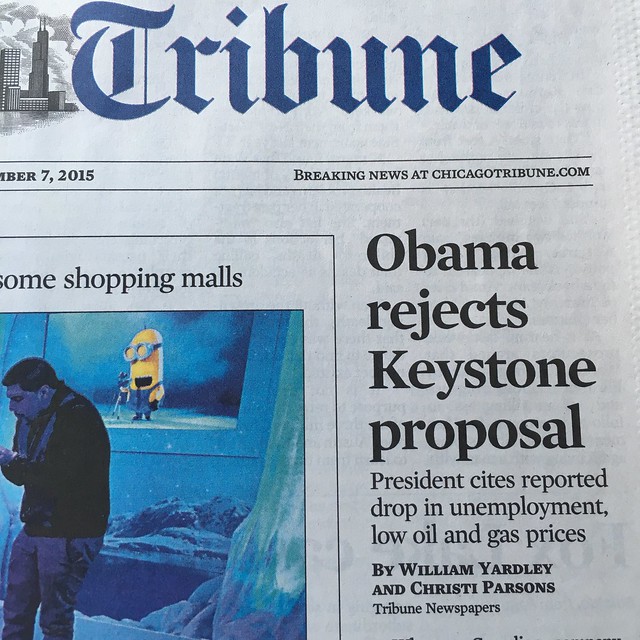 Speaking of the GDPR, the WSJ reports:

Tronc Inc., publisher of the Los Angeles Times, New York Daily News and other U.S. newspapers [Chicago Tribune], was among those that blocked readers in the European Union from accessing sites, as they scrambled to comply with the sweeping regulation.

“We are engaged on the issue and committed to looking at options that support our full range of digital offerings to the EU market,” the company said in notices it displayed when users attempted to access its news sites from the EU on Friday morning.

Others U.S. regional newspapers owned by Lee Enterprises Inc., as well as bookmarking app Instapaper, owned by Pinterest. Inc., were also blocking access in the EU.

The EU’s General Data Protection Regulation foresees steep fines for companies that don’t comply with the new rules, aimed at giving Europe-based users more control over the data companies hold on them.

Tronc and many other digital news organizations are among the worst offenders of collecting information on consumers. Using this article at the WSJ as an example, Ghostery reports 24 different cookies/trackers being served to a reader, from Facebook, Google, DoubleClick, and so on. I’m a subscriber, and WSJ still allows companies like Bombora to shovel my information into their corporate maws.

Going to a random Chicago Tribune article, say for instance “Let’s hear it for Memorial Day weekend at the beach. Oh, but the litter …”, and Tronc is serving me, a subscriber, 18 cookies/trackers from various entities, like Amazon, Google, and a plethora I’ve never heard of. My print newspaper doesn’t track me like this.

So, I’m not surprised that many news organizations are not in compliance with the new GDPR regulations, I’m only saddened that the US doesn’t have a similar protection for consumers. Savvier consumers can install anti-tracking services, like Ghostery, but what about everyone else?

Along with success comes a reputation for wisdom.